Boumalne Dades gorges, Roses Valley, kasbah Amridil. Ouarzazate in order to visit kasbah taourirt, Atlas studios, Ait Ben Haddou Kasbah
After breakfast in the hotel we’ll drive through the Dades Valley or Asif N’dades in Tamazight (berber), towards Kalaat Mgouna and Ouarzazate. The route through Dades Valley is the way of the thousand Kasbahs – providing numerous opportunities to take some of your best photographic shots of the trip. We’ll stop at Kalaat Mgouna, “the rose city”, to purchase rosewater, which will make your linen smell good a long time after your trip is over. Continue to Ouarzazate via the Amridil Kasbah, one of the last Berber chieftains during the 18th century, now the Kasbah is a house of many Glaoui people. Overnight in Ouarzazate or Ait Ben Haddou.

a) Jebel Zireg , Jebel Ras Khemmouna is a is a mountain ridge at the southern edge of the Mader basin places geological and Panoramic view, Various formations from the lower, and middle devonian are accessible, and many layers are commercially excavated mines , more that our grandfathers working in small mines of lead ore, Barite ore and Copper ore.

b) Jebel Mrakib , Jebel otfal is a mountain ridge at the southern edge of the Mader basin. Various formations from the lower, and middle Devonian are accessible, and many layers are commercially excavated for trilobites. Example Metacanthina maderensis Trilobites. Morzadec. A nice complete trilobite showing good detail. Has a nice black exoskeleton. The cephalon and pygidium flexed downwards while the thorax is arched up. Has a wide glabella and a small upturned tip at the front. The two schizochroal eyes can be seen. There is a small occipital spine at the very base of the glabella.

The name, trilobite, comes from the three distinct portions of their segmented body. The hard exoskeleton allowed good preservation as a fossil and served as defensive armor, but had to be shed periodically as the animal grew. These many legged arthropods roamed the sandy bottoms of the seas and coral reefs in search of food.
The trilobite is the earliest animal known to possess vision. The remarkable construction and preservation of trilobite eyes enable scientists to study the development of a sensory organ which is only rarely preserved in other organisms. As a group, trilobites survived for more than three hundred million years, from the Cambrian to the Permian period.

Bryozoans belong to the group of Lophophorates whose main common feature is the presence of a lophophore: double crown of ciliated tentacles that surrounds the mouth. The skeleton that supports the lophophore is the brachial system (or brachydium). By generating a stream of water, the tentacles can capture and sort plankton or organic particles. They also have a respiratory role by providing oxygen by permanent mixing.
Bryozoans are colonial forms. Other Lophophorates include bivalve forms: Brachiopods and vermiform organisms: Phoronians.

c) Ksar Ba Hallou is a large, all-stone village built on a hillock in the middle of the desert near Wadi Gheriss. It was abandoned about 300 years ago, because of a huge flood of wadi that formed swamps and created a monstrous invasion of mosquitoes! At least, that’s what is said …
When we get there, it’s magic … lost in the middle of nothing, we try to imagine the lives of people at the time, without cars, without a city nearby…

d) We will through via Foum Mharech Located in Foum Mharech, in the heart of dunes, oases and mountains.

Never underestimate what could be hiding in your drawers.

A once forgotten, unidentified fossilised bone that had been left in a museum cupboard has revealed the size of a once fearsome dinosaur.

The abelisaur would have roamed the Earth around 95 million years ago during the late Cretaceous period and is believed to have been a staggering 30ft (9 metres) long – longer than a double-decker bus.

Abelisauridae was a group of feather-covered, carnivorous dinosaurs. They were recognisable by their extremely small forelimbs, short deep faces, small sharp teeth and powerful muscular hind limbs. The newly-found abelisaur (illustrated) would have roamed Earth 95 million years ago and measured 30ft (9 metres) long

Alessandro Chiarenza, a PhD student from Imperial College London, came across the fossilised femur, or thigh bone, during a visit to the Museum of Geology and Palaeontology in Palermo Italy last year.

Chirenza, along with Andrea Cau from the University of Bologna were given permission to analyse the bone, which had been left forgotten in a drawer.

Scientists suspect they were also covered in fluffy feathers.

The name means ‘Abel’s lizards’ and the dinosaurs were ceratosaurian theropods that lived during the Cretaceous Period.

The abelisaur in the study would have lived in North Africa, which at that time was a lush savannah criss-crossed by rivers and mangrove swamps.

This ancient tropical world would have provided the abelisaur with an ideal habitat for hunting aquatic animals like turtles, crocodiles, large fish and other dinosaurs.

They discovered that the bone was from a dinosaur called abelisaur, which roamed the Earth around 95 million years ago during the late Cretaceous period.

Abelisauridae was a group of carnivorous dinosaurs, probably covered in feathers.

‘Smaller abelisaur fossils have been previously found by palaeontologists, but this find shows how truly huge these flesh eating predators had become,’ said Chiarenza, co-author of the study published today in the journal Peer J.

‘Their appearance may have looked a bit odd as they were probably covered in feathers with tiny, useless forelimbs, but make no mistake they were fearsome killers in their time.’

The bone in question came from North Africa, which at that time was a lush savannah covered in rivers and mangrove swamps, the perfect place for hunting aquatic animals like turtles, crocodiles, large fish and other dinosaurs.

The fossil originated from a sedimentary outcrop in Morocco called the Kem Kem Beds, which are well known for an unusual abundance of giant predatory dinosaur fossils. 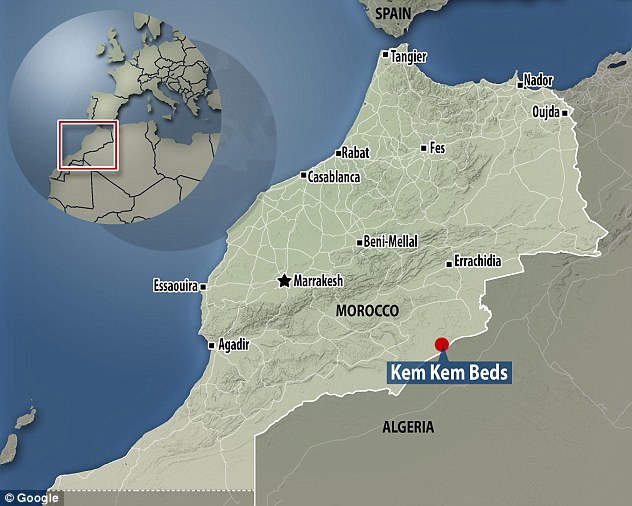 The fossil originated from a sedimentary outcrop in Morocco called the Kem Kem Beds (marked), which are well known for an unusual abundance of giant predatory dinosaur fossils. For more than a hundred years the Kem Kem Beds has been a puzzle to paleontologists because of the variety of different predator fossils

For more than a hundred years the Kem Kem Beds has been a puzzle to paleontologists because of the variety of different predator fossils.

Scientists have long wondered how abelisaurs lived alongside five other groupings of predatory dinosaurs without hunting each other into extinction. 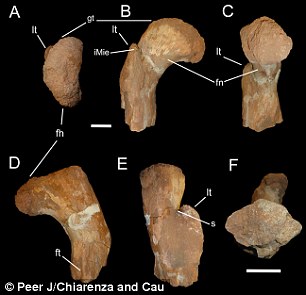 The bone, pictured from different angles, revealed the abelisaur may have been 30ft (9 metres) long and weighed up to two tonnes. Scale bar: 5cm

This phenomenon is called Stromer’s Riddle, in honour the German palaeontologist Ernst Stromer, who first identified this abundance in 1912.

But the researchers suggest that these predatory dinosaur groups may not have co-existed so closely together after all.

They believe the harsh and changing geology of the region mixed the fossil fragment records together, destroying its chronological ordering in the Kem Kem beds, and giving the illusion that the abelisaurs and their predatory cousins shared the same terrain at the same time.

‘This fossil find, along with the accumulated wealth of previous studies, is helping to solve the question of whether abelisaurs may have co-existed with a range of other predators in the same region,’ Chiarenzi added.

The bone revealed the abelisaur may have been 30ft (9 metres) long and weighed up to two tonnes, making it potentially one of the largest abelisaurs ever found.

‘Rather than sharing the same environment, which the jumbled up fossil records may be leading us to believe, we think these creatures probably lived far away from one another in different types of environments.’ 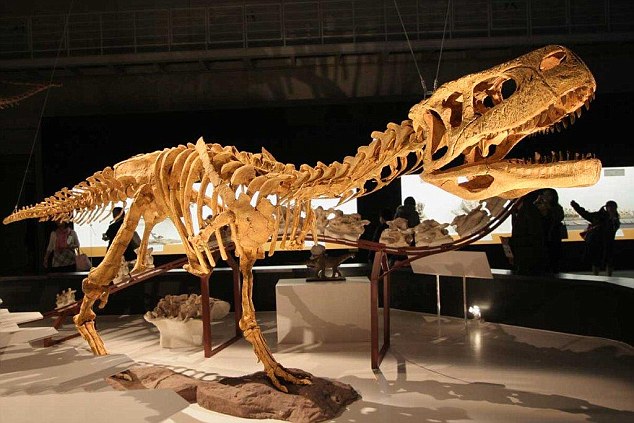 Fossilised femur bones are useful for palaeontologists as they can determine the overall size of the dinosaur (a skeleton of an abelisaur is shown), because they are attached to the thigh and tail muscles. They have scars which reveal where the ligaments and muscles were attached to the bone and how big they would have been

Fossilised femur bones are useful for palaeontologists as they can determine the overall size of the dinosaur, because they are attached to the thigh and tail muscles.

They have scars, or bumps, which tell palaeontologists where the ligaments and muscles were attached to the bone and how big those muscles and ligaments would have been.

This is helping researchers to determine the maximum sizes that these dinosaurs may have reached during their peak.

This finding was a great example of how not all discoveries need to be made in such remote locations.

‘While palaeontologists usually venture to remote and inaccessible locations, like the deserts of Mongolia or the Badlands of Montana, our study shows how museums still play an important role in preserving specimens of primary scientific value, in which sometimes the most unexpected surprises can be discovered,’ said Cau.

‘As Stephen Gould, an influential palaeontologist and evolutionary biologist, once said, sometimes the greatest discoveries are made in museum drawers.’

Next the team will be looking for more complete remains from these predatory dinosaurs trying to better understand their environment and evolutionary history.

In the region of Tafraoute, layers from the Devonian and Ordovicium are exposed. more that our grandfathers working in small mines of lead ore, Barite ore, Copper ore, amethyst, bones, teeths dinosaurs, Trilobites fossilized and Bryozoaires fossilized.
after that we will leave to Tafraoute N’Ait khebach village, through different panoramic view, and Berber villages, in Tafraoute where we have relaxing time. And explore how Berber people lives and nomadic tents, then dinner and overnight in this Berber area.

After breakfast, we will continue our journey to Merzouga, via Ramlia. Stop in stone inscriptions centuries ago, finally reach to Merzouga overnight in desert camp or Riad/hotel.

After breakfast, firstly you will visit the area with your driver. Merzouga, is a small village in south eastern Morocco. About 35 Km southeast of Rissani, about 55 kilometers from Erfoud. And about 50 kilometers from the Algerian border. The village, is known for its proximity to Erg Chebbi. An Erg, it is for this reason a part of the itineraries of many tourists visiting Morocco. Merzouga, has the largest natural underground body, of water in Morocco. In 2006, Merzouga experienced devastating flash floods. Visit nomadic families live near to the dunes under tents, enjoy with Gnawa music. Finally back to your hotel to prepare for camel ride, take pictures for sunset and overnight in desert camp.

Early morning, take pictures for sunrise, then ride camel back to hotel for shower and breakfast. After you will go back to Errachidia cross traditional market (Rissani), Erfoud fossiles city, Ziz valley, Errachidia airport, and ends of our service tour.

NB: this is our itinerary, but if this itinerary is not you are looking for, you can Suggest for us your program.

In case you want to modify any of these tours, just be in contact with us beforehand and we will make it happen.